So! I can finally blog about this one. I had a photo of L in the dress but I didn’t want to splash her all over the interwebs without first getting her permission to do so. Of course she said yes, and the pic I have of her is oh-so-cute so here’s the post with some juicy internal shots of the dress for good measure.

First up, my gorgeous sister in her dress (sorry for the quality, it’s off a phone – it’s the best we could get):

Now that you’ve seen the outcome, here’s the blood, sweat and tears behind it (only half joking! ;)). As I’ve previously mentioned this is a pattern hack of the Colette Laurel. I basically cut it off at the same points on the back and the front pattern (after a bit of trial and error), created a waistband, then widened the skirt section to allow enough fabric to gather.

As the lace was see-through (obviously!) I underlined it with a similar colour lining. Oh the hours of hand-basting those layers together. I did initially try to sew it by machine and that was an EPIC fail so out came the unpicker and some bright thread (for contrast so I could remove it all when finished) and needle. Once the two layers of each piece were joined as one, I then sewed everything together.

I was originally going to sew it all with French seams but found it was just far to bulky so I reverted to normal seams and finished them on the overlocker. My overlocker was not playing Mr. Nice-guy so the finishing doesn’t look too nice unfortunately. I have since put the overlocker in for a service; hopefully that will help. But what did look nice was my hand-picked zipper and hand sewn bias edging! 🙂 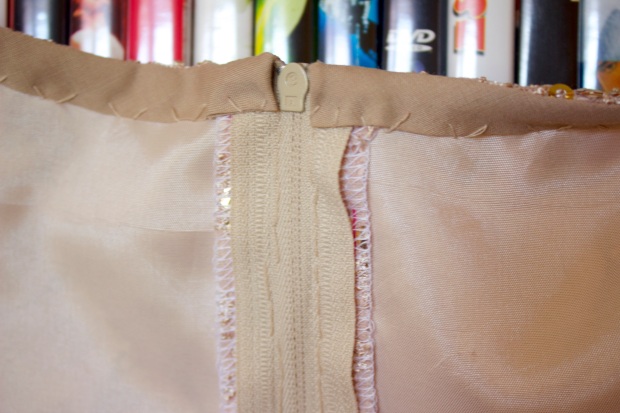 Now, be gentle on me. All these stitches were done by hand and I have never done this before! Having said that, I think I did an awesome job and was really pleased with how it turned out. Having never done a hand-picked zipper before, it took a little wrangling for me to get the hand positions and the garment laying the right way before I got the hang of it. After doing it once, I don’t think I ever want to install a zipper any other way! 🙂 I used Tasia from Sewaholic’s wonderful tutorial, it can be found here. It’s just so much easier to make sure the zip is straight and in place when you are going slowly by hand. Obviously on the bags I make, I will still machine sew the zipper because you usually don’t have much fabric to deal with and it’s a straight line to sew but for clothing, I think hand-picked is the only way to go.

I especially wanted to do all this sewing by hand so that I could attach the zipper and the bias edging only to the lining and the stitches wouldn’t be visible on the outside of the lace. The thread I chose was a perfect match for the lace colour so you can’t even see the little stitches on the lining through the lace unless you look really hard. It blends wonderfully. 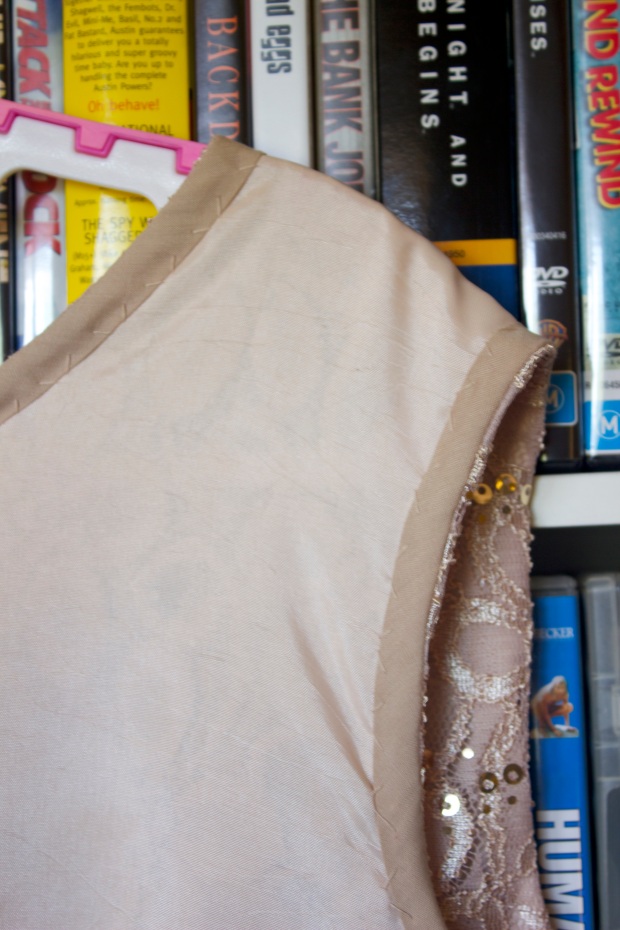 After all the stress, tears and long hours making this dress, I think it was all worth it as L was so happy with it and I think it’s the most adventurous thing I’ve made to date! Me? Doing a pattern hack?!! 😉 Just to see how happy my sister was with this dress made it more than worth it and I think she looked AMAZING!

Hi! I'm Julieanne and welcome to my blog! I am the host of Lovebird Lane Vlogs on YouTube and the lady behind Lovebird Lane hand-dyed yarn. Thanks for joining me. :)

Find me on Ravelry: